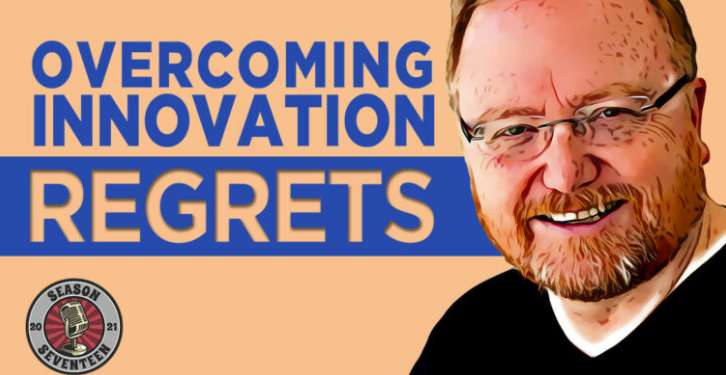 Regret is one of those emotions that can derail your future success. Learn how to move past innovation regrets to achieve success.

As innovators, regrets can be things like someone else launching an idea you had before you were able to execute it. Today, I am going to share three of my innovation regrets, and how to move past them to continue achieving success.

During the early days of computer viruses, I was Director of Product Development for ThumbScan. We offered a fingerprint biometric device under $1,000, which was the first at this price that could attach to a PC. Since this was before PCs were common, people didn’t see much value in the company. During this time, I was making headlines for my work on computer viruses and had written down a ton of ideas about them in a notebook I had. Then, Thumbscan started struggling and sales were dropping. I ended up setting aside my notebook of ideas and focusing on other things. Next thing you know, Norton and McAfee, came out with products similar to my ideas and became very successful. I made a few big mistakes in this situation and learned some lessons. Firstly, I went wrong when I correlated people’s interest in the product to an entire industry segment. I also looked at the “now” instead of looking at what could happen if viruses became a major issue. My other big mistake was that I didn’t go back and present my ideas to McAfee and Norton. At this time, I was well-known and could have successfully leveraged my reputation. Instead, I chose not to do it because I didn’t want to be the second or third guy coming out with the idea, I wanted to be the first. This was another innovation regret because typically, the first people who come out with something don’t create the best product.