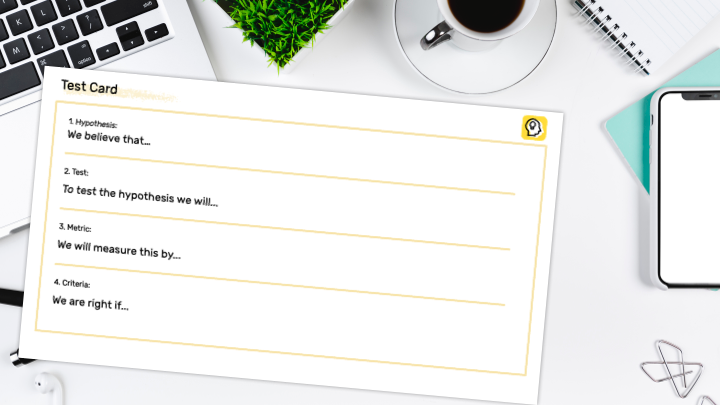 ‍The idea validation or test card is a tool to keep track of hypotheses you have, design experiments to test those hypotheses and run the tests. This will help you to base decisions not just on believes and assumptions but on actual data.

Idea validation could be misunderstood here because whenever you go out to conduct tests and experiments for your idea, it is crucial that you don't just try to prove your hypothesis! Instead, also try to disprove your believes so that you can be sure that it's not just your own assumptions. It is thus not just about seeing whether your own idea is correct.

Why do I have to validate my ideas?

There are two key reasons why you need to go out and validate your idea:

Don't fall in love with your idea!

You have probably heard that sentence before: don't fall in love with your idea. Yet, it happens rather quickly with us realizing what is going on. We often love our ideas and think they are amazing but that is exactly why we do tests and experiments.

How to validate my idea?

It is not enough to go out and simply look for a Yes/No answer. It's not about "Is the idea good or is it bad". Rather, you should go out with curiosity to find out more about the potential problem and about how it could be solved. Go out with certain hypothesis and define clear rules to overcome bias.

Now the template (download below) can help you to bring more structure into your idea validation.

How to use the template‍

1. Fill out the test card

a. Start by stating your hypothesis.

This hypothesis should represent something that you believe to be true about the problem, the market or the solution. It could for example have such a structure:

b. Explain the experiment

Explain in on sentence how you want to test the hypothesis. You could for example test ideas by talking to people from your target group, by trying ads on google or by building some prototype.

Define clearly how you will measure your experiment to prove or disprove your hypothesis. For example that you want to talk to X amount of people.

d. Define how you evaluate the experiment

What is the exact outcome that needs to be there to prove or disprove the hypothesis? For this part, it is very helpful if you set yourself measurable goals. E.g. if more than 10 of the interviewed people say X then the hypothesis is proven.

Really Good Pro Tip: Before rushing into an experiment, write all kinds of hypothesis into different test cards and then prioritize them

Before you actually go out to conduct experiments, do this exercise for all the hypotheses you have and consider having several experiments and test cards for the same hypothesis, to increase reliability of the tests.

4. Go for it and learn from it

Prophet Study: Applying the Cultural Levers of Transformation
Learn how to determine key cultural levers on which to focus, based on your organization’s greatest needs for cultural change
templates